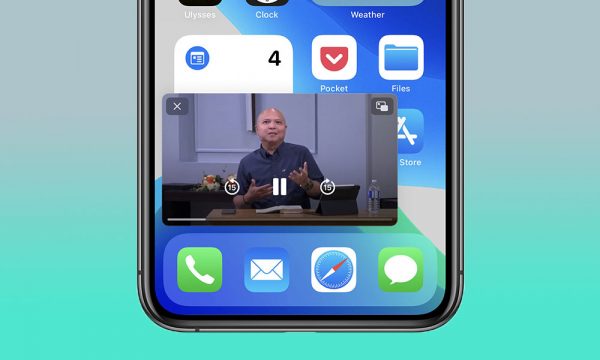 We’ve seen this feature before on the iPad. Apps like Netflix or Twitch could still run in a pop-up window while you navigated or used other apps. However, this is the first time we see this on the iPhone’s smaller screen.

Sure, this isn’t a full multitasking experience, but it’s definitely a step in the right direction. The best part is that the Picture in Picture feature will work on any iPhone that runs iOS 14, no matter how small its screen is, which is great since some iOS 14 features aren’t supported on older devices, like the new Back Tap Feature.

Fortunately, unlike Back Tap, you can use Picture in Picture even using a second-generation iPhone SE.

That being said, Picture in Picture isn’t supported by every app on the App Store yet. Since it’s a new feature, developers still need to update their apps to take advantage of it.

Fortunately, there’s already plenty of apps that support Picture in Picture right from the get-go. Some apps are still a bit buggy, but most of them work as intended.

List of Apps That Support Picture in Picture on iPhone

Also, any app that already supported Picture in Picture on the iPad will work on the iPhone as well.

In addition, the Reddit and Redbox apps support Picture in Picture too. However, these apps are still experiencing some bugs and issues when using them. Feel free to try them, but keep in mind you might experience some minor problems.

Apps That Don’t Support Picture in Picture Yet

There are still a bunch of apps that haven’t been updated to take advantage of Picture in Picture on the iPhone. Since iOS 14 is still in beta version, it’s possible that we’ll see some updates for these apps in the future. Until then, here’s the list.

As you can tell from the list, the YouTube app still doesn’t support Picture in Picture for the iPhone. And even when it does, chances are, only users that pay for YouTube Premium will be able to use the app in Picture in Picture, similar to what we’ve seen before from the company.

Nevertheless, there’s still a way you can run YouTube in the Picture in Picture Mode. We’ve talked about this before, but here’s a quick tutorial on how to do it.

We don’t know exactly when and if YouTube will change this option, so use it while we still can.